What is a meme?

Memes are images created to tell a joke through conceptual movie, event, celebrity, and otherwise reference. Memes require three things to be used and love by the masses (also known as going viral).

How does it relate to Ancient Rhetoric?

This brings up the philosophical question of, “What is an enthymeme?” Well I’ll tell you as simply as I can. An enthymeme is an argument in which the premise is not explicitly stated. A meme is our virtual world is something that illustrates how we feel about something while creating general humor to the internet audience. In this illustration the premise or purpose is not explicitly stated but implied by the context behind the image.

What is internet humor?

In order to really understand how to spread, compile, and free the creation of memes in virtual society we must first understand what makes the references and jokes so truly funny.

Internet humor is any joke or narrative that is displayed on public domains for world wide usage and sustainability. This type of semi-institutionalized humor starts as a specific group’s inside joke and develops in to a significant portion of Internet users which gains popularity, ideology, and even rules.

We all know that nothing disappears off the internet so the question that makes many wonder is who started the meme?

Origin of THE MEME

The exact origin of the meme is a tough one to determine. Many web image boards and message boards tend to be the ground for new memes to spawn, compile, spread, and be freed. 4chan is one of the most frequented sites for image bulletin boarding, comments, jokes, and internet trolling so it can be assumed that memes were born there like many other concepts and popular culture.

However, long before the internet started having its fun, motivational posters were illustrations of inspirational quotes, jokes, and intertextual media concepts that made people’s day at the office, at home, and at school. Now they’re one of the longest-standing virtual jokes (since about 2010), and their uses transcend through virtual memes.

If you’ve never seen the U.S. TV series, The Office, then you’re going to learn something about it today and have a blast. This series depicts the everyday lives of office employees in the Scranton, Pennsylvania branch of the fictional Dunder Mifflin Paper Company. Please check out the trailer below.

Dwight Schrute is notorious for his lack of social skills and common sense. He is extremely blunt, logical, and keeps the crowd entertained with his dry humor. 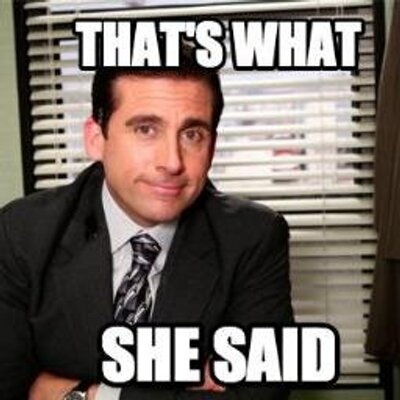 Michael Scott is the central character of the series as the Regional Manager of the Scranton branch of paper distribution company Dunder Mifflin Inc. He is an immature boss that likes to have more fun in the office than doing actual work. He tends to say “that’s what she said” if someone else in the show makes a comment that can be construed as dirty or if there’s an awkward moment that needs an ice breaker.

Cultural fads pop up in every walk of life, but some are truly on liberated and expressed freely on the internet like how memes have become the collective compilation of concepts, jokes and characters that are now considered the bread and butter of spreadable internet comedy.

And even though some of these jokes are daring, some are potentially offensive and some may make little to no sense at all, you’ll still find yourself chuckling at your computer screen, cell phone, or tablet.

Interactions for my readers

If you have any favorite memes (created personally, by others, display culture or spam) please feel free to share a link below in the comment section. I’d love to see what you all think is funny.